Answering the call: Changing how 911 responds to mental health crises.

San Francisco’s roughest neighborhoods can seem dominated by the homeless, the mentally disturbed, and those openly using drugs. But San Francisco Mayor London Breed is cutting the police budget.

Correspondent John Blackstone asked, “Don’t you need more police on the street to change that?” 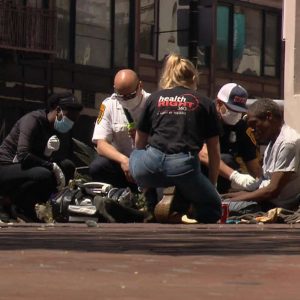 “We gotta look at things differently,” she replied. “The challenges that people face are not what they used to be. And a police response doesn’t solve all of these issues.”

So now, in San Francisco many calls to 911 no longer bring armed police officers; instead, dispatchers send what the city calls a Street Crisis Response Team trained to deal with mental health issues.

Stephanie Chiri, a behavioral therapist, is on one of those teams: “When someone is experiencing a mental health crisis, especially psychosis, it can look scary to somebody to see a person who’s talking to themselves or yelling into the sky.”

“Now you can call and ask for us, too,” Chiri replied.

“In our city, and I think throughout the nation, a lot of extra jobs and tasks have just been given to law enforcement because there’s nobody else,” said Fire Captain Simon Pang, who is in charge of the crisis response teams. Members come from the city’s health and fire departments. They do not carry guns.

“People living in the streets often have a history of complex traumas,” said Pang, “and law enforcement, somebody with a gun can be very triggering and potentially escalating for someone like that.”

So far this year, nationwide more than 50 people with mental illness have been shot and killed by police. One study concluded that almost 25 percent of fatal police encounters involved mental illness.

Chiri said, “Having a mental health crisis is not a crime. And it’s not necessarily a public safety issue. So, having our team here to be able to respond to those non-violent mental health calls is critical to free up the police to address what are actually public safety concerns.” 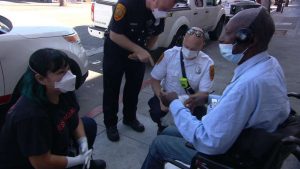 As well as a mental health expert like Chiri, each crisis response team will have paramedics like Richard Platt and Lesley Fong, and one member like Michael Marchiselli. He’s called a peer counselor because, well, he’s been there, done that. “When somebody says, ‘Do you have a license or degree?’ I think the streets and drug addiction have been my degree!” Marchiselli laughed.

Platt said, “There will be limits to what we can do when it comes to our personal interactions. Michael doesn’t have some of that; he is able to use his gut in a way that we usually can’t.”

“No, actually it was the opposite.”

Earlier this year, Reeves, desperate, sought help from one of the street crisis teams. They found him a place to live. “It was a godsend, and it was right on time,” he said. “And you know, it was the first people actually listen to me.”

He said he would never go to the police for help: “Like, if a police shows up right now, you guys wouldn’t think anything of it. My heart would start beating fast. I would wonder, like, What are they over here for? I’ll be looking around see if there are some other Black people. It’s just not a good situation that ends for people that look like me.”

With police reform now an issue nationwide, programs are being developed across the country like the one in San Francisco.

Blackstone asked Mayor Breed, “So, what this program is doing is taking away some calls that used to go to the police, taking some duties away from the police. Is this ‘defunding’ the police?”

“Well, I don’t like to label it,” she replied. “The issue here is, we have to think about policing differently than we ever have before, especially in light of what we see the data shows us. The goal is to meet people where they are, to develop rapport, to have a conversation, to treat them like human beings no matter what they’re going through, and to make sure you build trust within seconds. And that can make all the difference.”