February marked 50 years since John Glenn blasted off to orbit the Earth. Glenn, one of the original Mercury 7 astronauts, is an American hero. But he has his own hero — his wife, Annie.

From the Summer 2012 Newsletter – The Stuttering Foundation.  Author and CNN contributor Bob Greene recently wrote on CNN.com about Annie’s struggles with stuttering. “Her stuttering was so severe that it was categorized as an 85% disability. Eighty-five percent of the time she could not manage to make words come out,” Greene explained.

As a military family, John and Annie moved often. It was often hard to settle in a new area. “I can remember some very painful experiences — especially the ridicule,” Annie recounts. 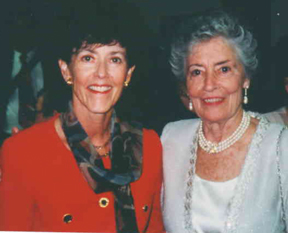 “In department stores, she would wander unfamiliar aisles trying to find the right section, embarrassed to attempt to ask the salesclerks for help,” Greene wrote. “In taxis, she would have to write requests to the driver, because she couldn’t speak the destination out loud. In restaurants, she would point to the items on the menu.”

John is now 90 and Annie is 92. They have been married for 69 years. The two knew each other since they were young children because their parents were close friends.

“Even as a boy he was wise enough to understand that people who could not see past her stutter were missing out on knowing a rare and wonderful girl,” Greene said about John and Annie.

In 1973, at the age of 53, an intensive program was able to help Annie speak more fluently.

“I saw Annie’s perseverance and strength through the years and it just made me admire her and love her even more,” John wrote previously. “I don’t know if I would have had the courage.”

Annie has served as a longtime spokesperson for the Foundation. She chaired National Stuttering Awareness Week, has been featured on posters, in press releases and in the Foundation’s public service ads. As a symbol of courage, she is a real inspiration to all women who stutter.

You can read the entire article about Annie Glenn by columist Bob Greene at http://edition.cnn.com/2012/02/19/opinion/greene-john-annie-glenn/index.html.