Mental health advocates chastised President Trump for saying the U.S. could fight gun violence by reopening institutions to keep “mentally deranged and dangerous” people off the streets, saying it could stigmatize patients who thrive in their communities, while allowing hateful shooters to hide behind the banner of mental illness. 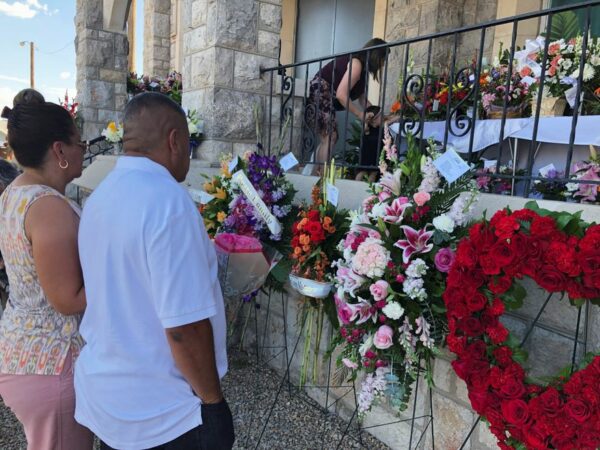 Photo by: Russell Contreras
Mourners deliver flowers Friday for the funeral in El Paso, Texas, of Margie Reckard, 63, who was killed by a gunman in a mass shooting earlier in the month. Some mental health advocates say that the focus on people with mental illness is a distraction from solving gun violence in the U.S. (Associated Press)

Advocates also said care has come a long way from the days of widespread institutionalization, with federally supported clinics and other programs offering ways for people with mental illness to go to work and enjoy time with family.

“We need our public officials, including the president, to stop scapegoating people with mental health conditions. That’s a 19th century solution to a 21st century challenge,” said Paul Gionfriddo, president and CEO of Mental Health America, a “community-based” nonprofit that seeks to support people with mental illness.

Others said focusing on people who have mental illness distracts from the issue at hand, as Congress seeks a response to massive shootings that kill dozens in El Paso, Texas, and Dayton, Ohio.

“It’s easier to get a gun in the United States than it is to get mental health care,” Angela Kimball, acting CEO of the National Alliance on Mental Illness, told The Washington Times.

Mr. Trump sparked the debate late Thursday, as he departed his working vacation in New Jersey for a campaign rally in New England. He bemoaned the decades-old closure of institutions in New York City and elsewhere, saying unstable people were allowed “onto the streets.”

He was responding to questions about his plans for gun control, such as expanded background checks, as he balances an outcry for tougher measures with his staunch support for Second Amendment rights.

Segments of his political base have warned him not to crack down on gun ownership, saying it would cost him their support.

Mr. Trump seemed open to a range of measures after the shootings on a few hours apart on the first weekend of August, though his comments in recent days have focused on mental illness.

Last week, he started to say the U.S. has to look at “building institutions again.”

“Because, you know, if you look at the ‘60s and ‘70s, so many of these institutions were closed. And the people were just allowed to go onto the streets. And that was a terrible thing for our country,” Mr. Trump said. “A lot of our conversation has to do with the fact that we have to open up institutions. We can’t let these people be on the streets.”

Mr. Trump picked up the thread at a campaign rally in Manchester, New Hampshire. His rhetoric toggled between helping those “in need” and taking people off the streets.

“We’re going to have to give major consideration to building new facilities for those in need. We have to do it and at the same time we will be taking mentally deranged and dangerous people off of the streets,” he told supporters.

In response, the American Psychiatric Association pointed to its Aug. 5 statement in the wake of the mass shootings, when it said the overwhelming majority of people with mental illness “are not violent and far more likely to be victims of violent crime than perpetrators of violence.”

Mental Health America said it is worried that politicians are flipping the debate on its head.

“Mental illness doesn’t cause violence, but violence causes mental illness,” Mr. Gionfriddo said. “What are we doing for the living victims of the recent violent attacks, who are so soon forgotten by most public officials?”

Ms. Kimball said the best thing Congress can do for those with mental illness is to pass a long-term funding extension for the Certified Community Behavioral Health Clinic demonstration program, which offers 24/7, comprehensive care to patients within their communities. The program has bipartisan support but it’s been funded in short-term spurts, with the next deadline arriving Sept. 13.

“We’re now seeing that even with the most severe conditions, like schizophrenia, people can live healthy, fulfilling lives if they get the right treatment early,” she said.