NAMI (National) has established itself as the most formidable grassroots mental health advocacy organization in the country.

NAMI, as it is known today, is the result of the efforts of a few courageous San Mateo County parent leaders, families, friends and professionals who worked tirelessly in the 1970s and 1980s to give birth to an organization that would completely change the way the community viewed mental illness. During that time families dreamed of the day when a child with schizophrenia would be treated no differently than a child with another chronic illness like leukemia or heart disease. They hoped for a time when mental illness could be discussed openly and their ill children and family members could be properly cared for in their own communities. Accomplishing these seemingly simple goals, however, was anything but easy. 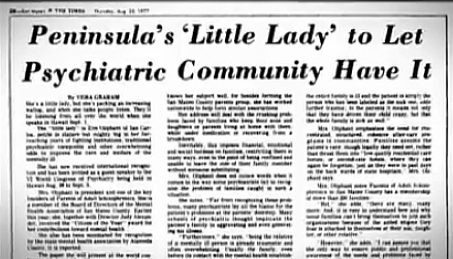 NAMI San Mateo County all began when Eve Oliphant placed a newspaper ad inviting people to her home to share their concerns regarding mentally ill family members. The meeting was organized by three parents: Tony Hoffman, Fran Hoffman and Eve Oliphant. This trio founded the organization originally called Parents of Adult Schizophrenics (PAS) and led it from 1974 into the 1980s. Over the years, many other parent leaders, families, consumers and supporters joined. The organization they started in San Mateo turned into a national movement to inform and educate the country about mental illness and advocate for the rights and care of mentally ill family members. This effort has forever changed the way we think about, treat and care for mental illness.

Eventually PAS became a non-profit association and changed its name to Alliance for the Mentally Ill of San Mateo County.  Later the entity was rebranded to NAMI San Mateo County. By that time the Hoffmans had set up offices in Sacramento to lobby on behalf of the mentally ill and served as founding members of California Alliance on Mental Illness (CAMI). There are now three important levels of NAMI:  local, state and national.

Since its 1979 inception in San Mateo, NAMI (National) has established itself as the most formidable grassroots mental health advocacy organization in the country. Dedication, steadfast commitment and unceasing belief in the NAMI mission have produced profound changes. NAMI has been the driving force behind a national investment in lifesaving research, parity for mental health care, and increased housing, treatments and services that are available to those in need when they need them most. NAMI awareness efforts have successfully addressed the stigma of mental illness, ensuring the decrease of barriers to treatment and recovery. The NAMI signature education programs have served as a beacon of hope for hundreds of thousands of families and individuals.

Mental illnesses are brain disorders that are biologically based medical problems. Untreated, they can cause severe disturbances in thinking, feeling and relating. This results in substantially diminished capacity for dealing with the ordinary demands of life. Mental illness can affect persons of any age and occur in any family. They are not caused by bad parenting and not evidence of weakness of character.

Watch the video to learn more about the history of NAMI San Mateo County.