A New Mental Health Crisis Line Launches on Saturday. Is California Ready to Operate It?

A new three-digit mental health crisis line goes live in California and across the country on Saturday, July 16, offering help to people who are feeling suicidal or anxious, or are hearing voices.

The new, easier-to-remember number — 988 — will officially replace the longstanding 10-digit 800 number for the National Suicide Prevention Lifeline. And in California, it will connect callers to one of 13 call centers in the state.

In addition to offering emotional support from trained counselors by phone or text, as the Lifeline has traditionally done for years, 988 also is intended to replace 911 for psychiatric emergencies — in which mental health staff, rather than police, would respond in person. The capacity to facilitate that by the upcoming launch date, however, will vary widely by region. 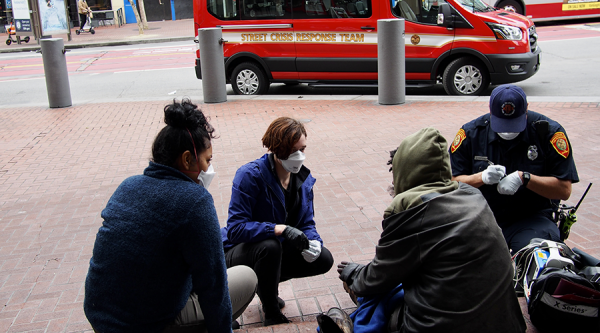 “Will it work perfectly? No, because changing crisis response won’t happen overnight,” says Angela Kimball, who directs advocacy at Inseparable, a mental health policy coalition. “And it won’t happen without all of us demanding that policymakers at every level of government step up and invest.”

Rather than treating mental health crises as public safety issues warranting law enforcement — many of which have ended tragically — Kimball believes that the compassionate help her son, Alex, received in 2017 during a manic episode he was having should serve as a model for effective crisis response.

“He’d ripped out cabinets in his house. He’d smashed the stove into pieces with a sledgehammer,” Kimball said during a recent webinar on the 988 rollout. “He was telling me that soap was poison and that he was being surveilled. He accused me of conspiring with the government against him.”

With help from a friend, Kimball got through to a local mental health crisis line in Portland, Oregon, where Alex lives. A mobile team came to his house, calmed him down and convinced him to go to the hospital.

“An incredibly kind and wise clinician spoke gently and respectfully to Alex,” Kimball says. “They didn’t talk in terms that were clinical, like paranoia, delusions or rapid cycling, bipolar. Instead, the lead clinician said, ‘Alex, I’m hearing that you haven’t slept for days and that things are getting kind of intense. Am I getting that right?’”

While this is an ideal scenario for how the new crisis line could eventually work, it won’t be the reality in many counties in California for at least a few years. Some cities and counties, including a handful in the Bay Area, have already started to build mobile crisis response teams, but those vary widely in terms of capacity, hours of availability and the types of calls they respond to. Other areas of the state, though, have little or nothing in place, due in part to delays in federal funding. And that means that many callers who need immediate in-person help likely will be routed back to 911.

But such 911 intervention will be still be rare, says Michelle Doty Cabrera, executive director of the County Behavioral Health Directors Association of California.

“When a person calls 911, they are expecting help to come to them,” she says. “If a person’s calling a national suicide prevention hotline for emotional support, they may not want anyone to know who they are, let alone where they’re at in that moment.”

For now, Cabrera adds, volunteers and staff at the call centers won’t be able to figure out where callers are located, even if they want to, because the system is organized by area code, not geographic location.

“So let’s say you moved to California from Washington, D.C., and you decided to keep your D.C. cellphone number,” Cabrera says. “You would be routed to the Washington, D.C., 988 call center, not to the one where you live, here in California. D.C. is not going to know anything about what local resources exist for you here and vice versa.”

The 988 crisis line was created through rare bipartisan federal legislation enacted in October 2020, with the goal of improving access to suicide prevention and crisis resources. But the bill allocated only a minimal amount of funding for states to implement it. In December 2021, President Biden allocated $284 million to states for start-up costs like upgrading telephone infrastructure and hiring more staff for call centers. Some federal money also will be available next year through Medicaid to help build mobile crisis response teams.

For its part, California already has earmarked $28 million in the state budget to get the call centers ready. But like most other states, it will have to figure out how to sustain the service in the long term.

Under one recently introduced state bill — AB 988 — landline and mobile phone users in California would initially pay an additional $0.08 per line, per month, and up to $0.30 per month in future years. The telecom industry, however, opposes the bill, and its fate is unclear.

Some mental health advocates also argue investing money in the crisis line is not the best use of scarce mental health dollars. They say the government is placing too much attention on crisis response and not enough on crisis prevention — akin to pouring resources into treating heart attacks without doing enough to help people lower their cholesterol and blood pressure to prevent the heart attack in the first place.

“I have such a concern that we are creating a crisis-system-industrial-complex,” Keris Myrick, an advocate who has schizophrenia, says on an episode of her mental health podcast Unapologetically Black Unicorns.

It doesn’t make sense to wait until someone is about to fall off a cliff to help them, Myrick says, arguing that government programs and health systems need to intervene more effectively in the earlier stages of mental illness.

Crisis is more tangible, and easier for people to hold on to, she adds, saying, “And that’s maybe easier to resolve in the short term than the prevention stuff that becomes about fixing a lot of social ills.”