Taking care of yourself doesn’t typically go hand in hand with the rock star fantasy of nonstop partying, but in 2017, that changed. In July, Justin Bieber canceled the remaining dates of his Purpose Tour in a move toward stability, taking to Instagram to explain his decision: “I want my mind, heart and soul to be sustainable… Me taking this time right now is me saying I want to be sustainable.” 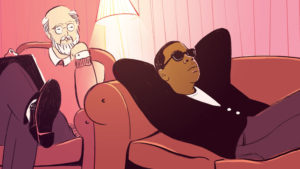 It’s a sharp turn from the norm. Canceled tours are usually caused by “exhaustion,” but instead of invoking his privacy, Bieber and his team were forthcoming. He wasn’t alone: This year saw artists like Demi Lovato, Selena Gomez and Logic candidly express their own issues with depression and anxiety. Lovato’s February documentary, Beyond Silence, laid bare her own mental health struggles and gave a platform to people suffering from schizophrenia, bipolar and other mental health disorders, while Gomez spoke openly about her own depression and anxiety in the media. Logic’s “1-800-273-8255,” named after the Suicide Prevention Lifeline’s phone number, kindled a relationship with the helpline organization, and the track, which features Khalid and Alessia Cara, went to No. 3 on the Billboard Hot 100 and secured a Grammy Award nomination for song of the year.

Why did it take so long for musicians to become vocal about mental health? “It’s everywhere, but people don’t want to talk about it,” says Chris Zarou, Logic’s manager. “Being forced to talk about it by having this song that’s so in your face and open, it has opened my eyes, and it’s great to see that people are talking about it. It’s healthy to have a conversation.”

Logic’s fans were the impetus for making both the song and Everybody, the revealing album that contains the track. “[My song] allowed artists to see that there can be a home for all this great music and all this great messaging, and actually great music prevails and great artistry prevails,” says Logic. “Seeing that [Everybody became a] No. 1 album showed me that people are actually taking notice and taking stock.”

Adds Zarou, “He has had so many interactions with his fans who’ve told him that his music has saved their lives.” A responsibility to be honest with fans has become more common during the past year. JAY-Z’s critically acclaimed 4:44 features casual mentions of his experience in therapy. The ease with which he raps about it is key to helping reduce the stigma around mental health care.

Linkin Park’s Chester Bennington, who died of suicide by hanging in July, had long used music to channel his depression. In May, Soundgarden frontman Chris Cornell was found dead in a Detroit hotel room following a concert at the Fox Theatre. Cornell had suffered from addiction and depression. These tragedies underscore the importance of support systems, from managers to label executives, who are understanding of their clients’ mental health needs — and the importance of artists speaking out and shining a light on these struggles.

“I’m proud of Logic for being brave enough to speak about something that may have been a little taboo,” says Zarou. “We’ve been working with the National Suicide Prevention Lifeline, and the data that they’ve been feeding us to show the actual difference that this song has made throughout the campaign has been unbelievable.” Frances Gonzalez, director of communications for the National Suicide Prevention Lifeline, adds: “We believe this is a great example of how it is possible for artists and the media to address suicide thoughtfully and creatively, alongside people in the field. Logic’s song is an opportunity to make the conversation about suicide a conversation about how people can find hope.”

This article orginally appeared in the Dec. 30 issue of Billboard.