A $105.8-million donation to Montage Health, the local nonprofit parent company of Community Hospital of the Monterey Peninsula, was announced Tuesday during an event at Monterey Conference Center.

The huge donation was made by Roberta “Bertie” Bialek Elliott, a Carmel resident who is the sister of Warren Buffett. 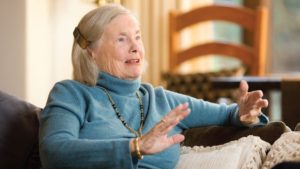 It will be used to build a mental health outpatient and inpatient center for children and adolescents at Ryan Ranch.

Currently, there are no mental health inpatient facilities for youth on the Central Coast.

The new center will be named “Ohana.”

Phelps spoke about his own challenges with substance abuse and depression. Despite being the most decorated Olympic athlete of all time, he noted that he was never chosen as a captain of his swim teams, until the last Olympics.

Phelps said he struggled with depression and loneliness after retiring from professional swimming and trying to be “normal” in a low-profile life. He now has a 1-year-old son, has another baby on the way, and plans to work with children in mental health. 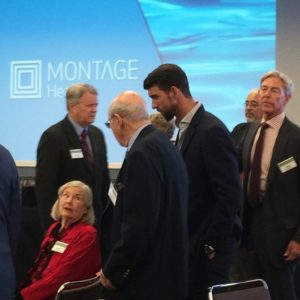 “Elliott wanted to do something transformational in the place she calls home. And she has — donating $105.8 million to Montage Health Foundation, the largest gift ever in Monterey County and one of the most significant philanthropic commitments in healthcare nationwide,” Montage Health wrote on its website.

“The extraordinary gift will be devoted exclusively to creating an innovative approach to child and adolescent mental and behavioral health. The hope is that elements of the model will be replicated elsewhere to address similar concerns throughout the nation. The need is painfully apparent, anecdotally and statistically,” Montage Health wrote.

Surveys conducted between 2014-2107 found that nearly 1 in 6 high school students in the Monterey Peninsula Unified School District seriously considered suicide. About 1 in 3 suffered depression-related feelings, according to the California Department of Education.

Dr. Eric Jacobson, medical director of Behavioral Health Services at CHOMP, said “Our kids really are neglected when it comes to mental healthcare.”

Packer said the new center envisions being a warm, welcoming place for youth.

The Ohana House will include:

· Up to 24 inpatient beds, with separate areas for boys and girls

· Rooms for one-on-one and family counseling

· Classrooms for inpatient youth and space for training and workshops